Did you watch Prince Philip‘s funeral? I’m very much a royalist, thanks to my 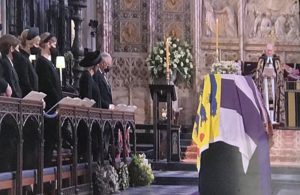 mom. She was British to the bone. If she were still here, she would have watched it and I wonder what she would think of all the drama around H&M. I really felt for HMTQ, sitting there alone, with her head bowed. I was so happy to see William, Kate and Harry walking together and talking. I hope they can mend their relationship.

My parents celebrated their 60th wedding anniversary in 2012, and I requested acknowledgment from the Queen. Mom was so thrilled to receive the good wishes. I took this photo just two mon 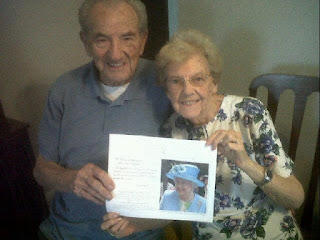 ths before we suddenly lost mom.

I’m fascinated with the British Royal Family and enjoy watching Lady Colin Campbell‘s YouTube channel. She’s very informative and quite a character. Do you enjoy royal romance stories? I have one written, but not published yet. It is on my list of indie books to release – titled Protecting Her Prince.

Below is the opening of the story, rough draft 🙂 So please be gentle. But I would love to know what you think so far.

Dana Knight pushed the sleeve of her jacket up and looked at her watch. The private jet was ten minutes late. She pressed her lips together and smoothed the cuff back in place. Straightening her arms, she curled her fingers and grabbed the edge of the jacket sleeves, pulling so there were no wrinkles at the elbow. She glanced down, satisfied with the precise way her pewter grey jacket sat on her hips, the smart crease of her slacks, and the spit and polish shine on her sensible black shoes. She was turned out well. As any bodyguard would be.

Tucking a strand of hair behind her ear, she glanced out onto the tarmac. The excitement in the arrival lounge was infectious and everyone seemed ready to jump out of their skin. It was still a mystery who had hired her. She didn’t care, really. It was a job. A good-paying one, which she needed.

She glanced at her watch again. Forty-five seconds since the last time she checked.

“Ms. Knight. Come with me, please.” She looked at the man. Airport security. He handed her a badge which she clipped to her lapel. “This way.”

Dana followed him to the door. He punched numbers into a keypad and stood aside. She tried not to look at her reflection in door glass as she passed. Not that she purposely made herself look like Scully in the X-Files, even though her hair had gone silver early, people did a double take when they saw her. She’d grown immune to the comments about the similarity and made a point of saying Gillian Anderson was her doppelganger, not the other way around. Just bad luck she had the same first name as Scully too.

The executive arrival terminal was a distance from the main terminals at Toronto Pearson Airport and she’d been here before. Dana walked to the window and stared out. It was private here, out of the public eye for celebrities. She watched a sleek and pretty jet come to a stop before the building. It was a typical, expensive jet, only bigger than most she’d seen. The hustle around the aircraft and the stairs aligned with the door, waiting for it to open. When it did, her heart thumped at the flash of gold she saw on the exterior of the door. A coat of arms?

The crowd in the lounge surged forward and was shuffled to the side. Dana stood on her toes. She wanted to see just as much as the rest of the people and when she did, her world tilted so that she had to steady herself with a hand pressed to the wall. Her legs wobbled and her oatmeal breakfast turned to a brick in her stomach. The man she’d thought she’d never lay eyes on again stepped off the plane. He descended the stairs and strode into the lounge. He was inside, and only a few feet away. Close enough to feel his energy. Close enough to leap into his arms. But she didn’t. She planted her feet and rearranged her face to show no emotion.

No emotion, Dana. Keep it business. Remember what he did to you.

I hope to see you on social media and you can find all the links on my website www.shanagray.com