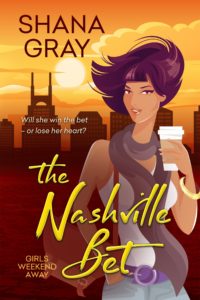 Look for the other Girls’ Weekend Away novels, including What Happens In Vegas!