I have no clue!! How is it possible we’re more than half way through May? How are you all doing with the quarantine and I hope you are are healthy and well. 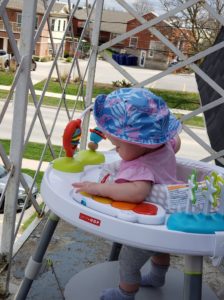 My son is still with me and we’ve done well to be co-habitating these past two months. He’s 29. I expect he’ll be heading back up north to work in early June if everything continues as planned. My granddaughter will be 5 months old on the 26th and that absolutely stuns me. Here is a photo of her with a too-big sun hat on.

I’m still waiting for news from editors and in the meantime I’m writing and plotting out new books, working on old ones to self publish. For you’re reading pleasure here’s an excerpt. Who doesn’t love a forced proximity trope!

Here in the rugged terrain of the Colorado Rockies, Jenna realized her life was in Chet’s hands. She hadn’t been nervous about the ride up to his mountain cabin. She loved the idea of spending the day 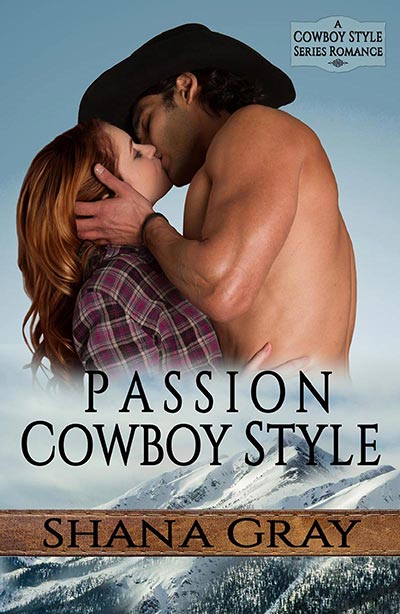 there and then riding back down by sunset. He’d warned her it was fairly rustic and closed up for the winter, but set in such a beautiful spot he was sure she would like it as much as he did. Jenna never thought herself high maintenance at all, so rustic didn’t concern her.

At first Jenna thought it a cool adventure. One she had looked forward to. She wanted to see his world, how he lived and where he spent his time, but the more the snow blew around them, the less sure she was about this escapade. She hadn’t done much trail riding, mainly just in rings and indoor arenas, but Chet assured her the horse he gave her would be solid and surefooted. There was nothing for her to worry about. Yet this morning’s ride quickly took a turn from sunny blue skies to gray clouds scudding overhead. Biting tendrils of snow stung Jenna’s face, the intense cold seeped through her thick coat. She shivered in deep, quaking tremors.

What if we’re lost?

The wind whistled through the trees and blurred her vision, causing tears to well up. She could feel them freezing on her cheeks and tucked her chin lower into the turned-up collar. Jenna hadn’t really thought of the nasty side of weather she might experience. She’d only really thought of the bright sun and spectacular scenery. She sought out Chet through the sheeting veil of snow. His broad back, barely visible, seemed like a mirage in the distance. She wanted to yell at him to go back and turn around, but she knew they’d traveled too far for that. She had to trust her horse would follow his if she lost sight of him in the swirling snow, and Jenna had to trust Chet wouldn’t let her stray far if they got separated.

When he snapped the tracking locater on her before they’d left, she wondered what the heck she’d gotten herself into. To wear such a thing heightened the concern she’d begun to feel at the remote, yet beautiful, land around her. Jenna did gain a level of comfort knowing if they did get separated he’d be able to find her with it.

Chet swiveled in the saddle and looked back at her. If he said anything it was impossible to hear in the chaos of the storm blowing around them, but he raised his hand with a thumbs-up. She smiled behind the collar turned high against her chin. He seemed to know the right thing to do at every turn. Jenna waved back and felt her nerves settle down. He didn’t look the least bit concerned. It would be okay, she told herself.

They continued to stumble along the almost invisible path with Jenna’s horse’s nose on the rump of Chet’s. Finally they emerged from the thick bush into a small meadow. Snow swirled and created little eddies around them as the horses struggled through the now-belly-deep drifts, their heads low against the gusts. Jenna peered through the falling snow. A dark smudge tucked under some old growth cedars materialized into a cabin.

Chet reined up at the side of the building and quickly dismounted. He helped Jenna down and led the horses into the small stable beside the cabin. She followed him, glad to be in some shelter. It almost felt tropical out of the wind even with the cracks in the wall boards letting in little flurries of snow. Chet un-tacked the horses and they gave a great shake, spewing ice-hardened clods of snow from their hair. He rubbed them down with straw and saw to it they were comfortable.

She watched him in silence, how he moved around the barn, so evidently in his element. He was a cowboy after all. Jenna realized this was the first opportunity to see him around horses and the trappings of cowboy life. He was handsome and her gaze ate him up. Exhaustion from the stress of the ride and the effort of clinging to the back of her horse seeped through Jenna and she leaned against the wall. She wasn’t used to all this strenuous activity. She had to admit, though, the strain on her muscles sure felt good. The skiing they’d done and riding for hours meant tomorrow she’d be a mass of knotted muscles. At least she had her big, strong cowboy to massage away her aches.

Chet broke open a bale of hay. Jenna pushed off the wall and picked up a flake, tossing it to the mare she’d been riding. The horses didn’t seem to mind the cold at all and steam began to rise off their backs.

Chet moved effortlessly around the horses, getting them bedded down and comfortable. He was always touching one, a palm on a rump or sliding his hand under their mane, giving little pats of reassurance and murmuring nothing in particular to them. She watched his hand glide over the smooth hair and it reminded her how well he’d touched her last night. Jenna turned her head aside so he wouldn’t see the blush that crept up her cheeks. He sure had done some very fine touching. She closed her eyes and breathed in a soft breath. She couldn’t wait until tonight.

One of the horses snorted and pulled her from her musing. They didn’t seem spooked by the wind and their noses were buried deep in the fragrant hay. Chet’s easy, calming way was infectious. Even Jenna felt it and now that they were in the safety of a building the anxiety that filled her moments before on the trail seemed to blow away on the wind.

Finally Chet was done and he smiled at her.

“Cold?” He wrapped his arm around her, pulling her tight and Jenna rested her head on his shoulder.

“Ya, a little.” It was cold and he was so big and warm. She snaked her arms around his waist and let him wrap her in his heat.

Chet’s touch ignited a fire in her, warming her from the cold and increasing her passion for him. She knew they were in the new bloom of a…what? New relationship? No, she didn’t want to call it that, so what then? Fuck buddies? She cringed, it was way too harsh a term to apply to Chet. She turned her face to him and their gazes met. Togetherness would do. Their all new togetherness had a fiery spark and she welcomed it. She hoped the spark wouldn’t die out too quickly between them so it could keep on building into a nice, comfy fire.

When their lips touched she sighed. They were good together. She was in the right place at the right time with the right person to keep her safe. He was both tender and sweet, with an underlying urgency of passion she wouldn’t deny. His kiss whispered promises Jenna refused to acknowledge. She was here for fun, that’s it, and she steeled herself against her softening emotions. She twisted to face him better and wound her arms around his neck to pull him nearer. The barrier of their heavy coats kept them apart, yet it seemed they couldn’t be closer.

She felt every muscle and plane of his strength through the fabric. The hard band of his arms secured her next to him and they melded into one. Their kiss deepened until they were both breathless and craving. The moaning wind echoed their own need and they parted, but their connection remained.

Chet pulled her from the stable into the blowing snow, keeping hold of her hand. He pushed open the door to the cabin and they fell into the dimly lit room. Wind and snow chased them inside until the door shut behind them, banishing the weather.

“Welcome to my mountain retreat.” Chet kissed the corner of her mouth.

Passion Cowboy Style is only .99. Grab your copy and escape with Jenna and Chet.

I’d love for you to:

Sign up for my NEWSLETTER and get a #FREEeBOOK

Friend me on TikTok – shanagrayauthor